The Shah Alam Buddhist Society (SABS) was officially registered on December 15, 1990 in Sri Muda, and the first Management Committee established on January 13, 1991. Over the years, as its activities increased, so were the members. It was obvious that the current premise was inadequate to meet the growing membership. In April 2003, SABS acquired a one-acre land in Bukit Rimau, Shah Alam, from Selangor State Government to set up a Buddhist temple.

Under the leadership of the President, Dato Vincent Lim, efforts were made to raise funds to complete the temple soonest possible. On January 16, 2005 construction work started after a ground breaking ceremony, and on April 22, 2007 the Bodhi Tree and Sala Tree was flown in from Sri Lanka and officially planted in the new temple. On April 29, 2007, the Shakyamuni Buddha statue was consecrated while on May 1, 2007, Wesak was celebrated in the Temple. Regular activities, including Dharma Talks and the Sunday Dharma School, commenced on July 15, 2007.

In 2007 President Dato Vincent Lim steered the Committee to adopt the ISO 900 Quality Management System. As a Buddhist society, SABS’s aim was to use ISO as a tool to create a well-documented management system that is guided by the Dharma with continuous improvement. After two years of effort, SABS succeeded achieving the ISO 9001:2008 certification. 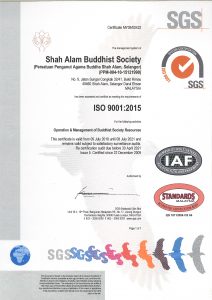